The Dutch Red Cross stamps appeared for the first time in 1927. This was 60 years after the founding of this organization in the Netherlands.

On October 29, 1863 a conference of representatives of sixteen European states in Geneva ends. They adopt the proposal of Henry Dunant to establish Associations of voluntary helpers. This date can be regarded as the birthday of the International Red Cross. On August 22, 1864 the Red Cross was formally established.

The occasion was the battle of Solferino between the French army under Napoleon III and the Austrian army in 1859.
After the battle 40,000 casualties were on the battlefield without anyone attending to them. Jean Henry Dunant (1828 - 1910), a Swiss banker, is there by coincidence. He is helping the wounded, but on his one it is impossible. He then devoted himself to the creation of a neutral aid organization. The Red Cross has become a worldwide relief organization whose operation in seven basic principles: humanity, neutrality, impartiality, independence, voluntary service, unity and universality. These principles form the basis for everything the Red Cross does and be reflected in all the actions of the volunteers of the Red Cross. 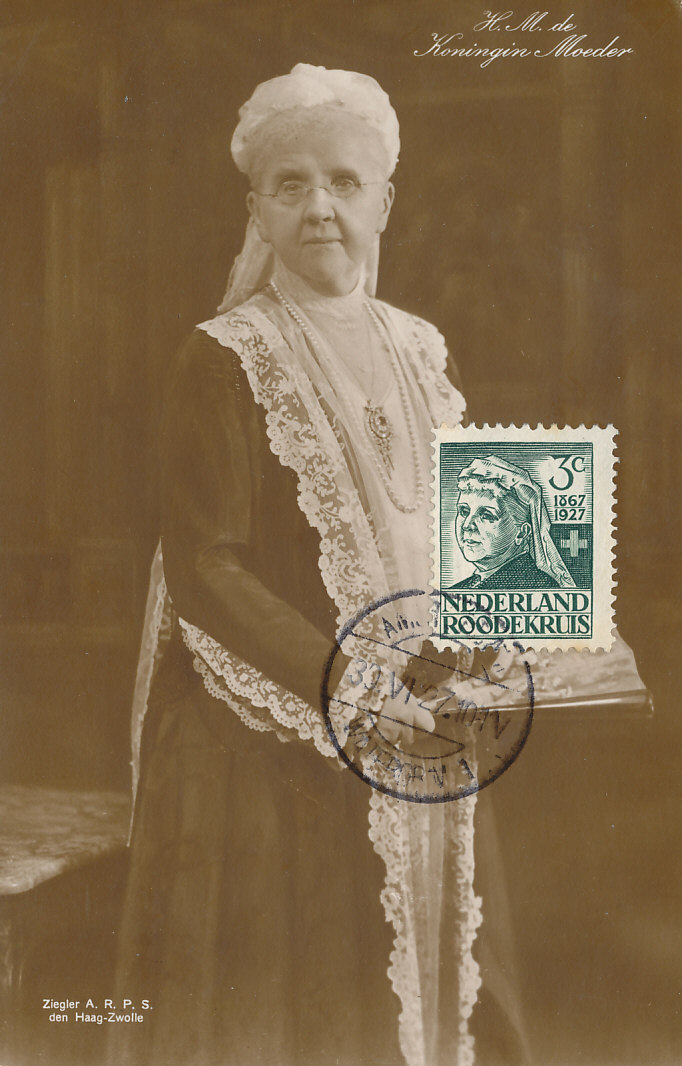 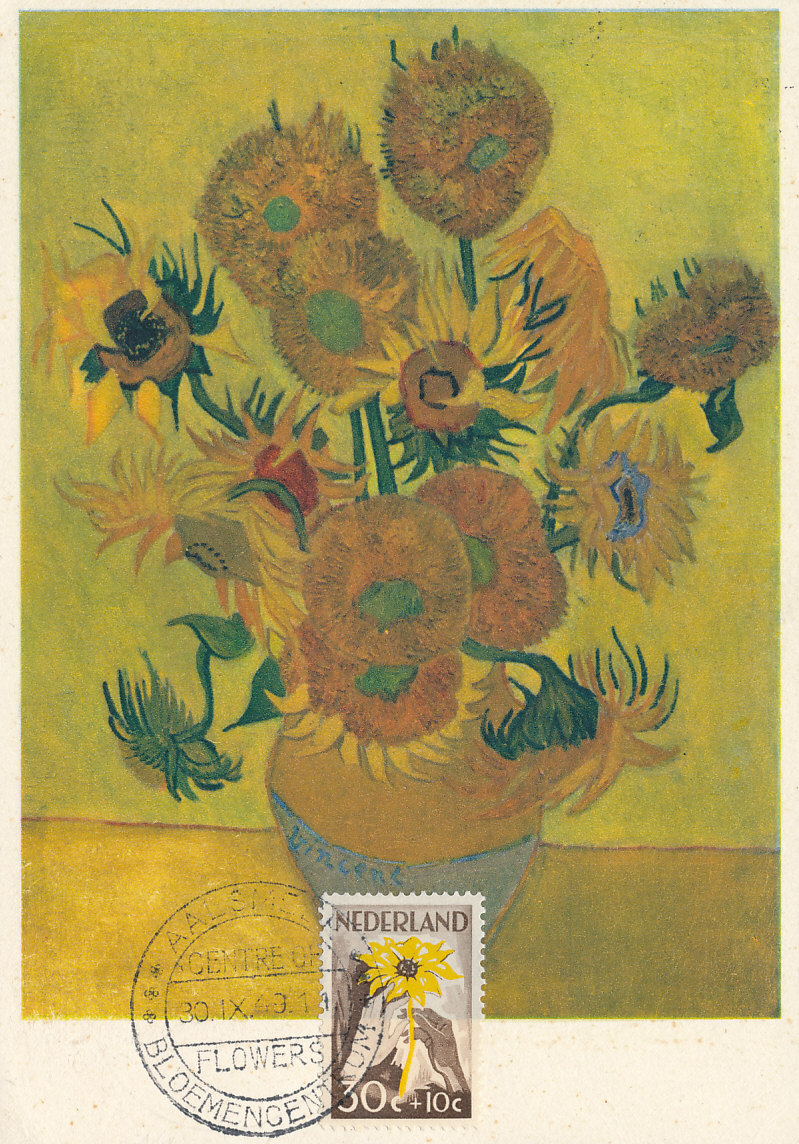 the Red Cross, appeared in the Netherlands in 1927. Maximum cards of these stamps are extremely rare. The chances are that these cards have to exist since for the topics on the stamps during that time were certainly appropriate cards available. Such cards can be found even in foreign countries in a collection about the Red Cross or Royalty. From the series of 5 stamps, I can show you one of the 1927 stamps, namely Queen Mother Emma.

In 1949 appear the so-called NIWIN stamps of which the surcharge in addition to the NIWIN and the Netherlands Foundation helps Indies will be paid to the Dutch Red Cross.
The stamp, designed by Christian de Moor, shows a sunflower in full glory. The creator of the maximum card (right) used a card with a painting by Vincent Van Gogh, and then used a postmark "Aalsmeer Flower center" that is a logical and appropriate choice.

From 1953 on the Dutch Post administration makes the choice to support this organization every five years. Of course the surcharge is dedicated to the Red Cross. Besides the Red Cross only the Kinderpostzegels (Children's welfare) and Zomerzegels (Summer stamps) get this state where the latter two even appear every year. The image below 3 shows an English-language brochure from the Philatelic service in The Hague with information about the series from 1953. 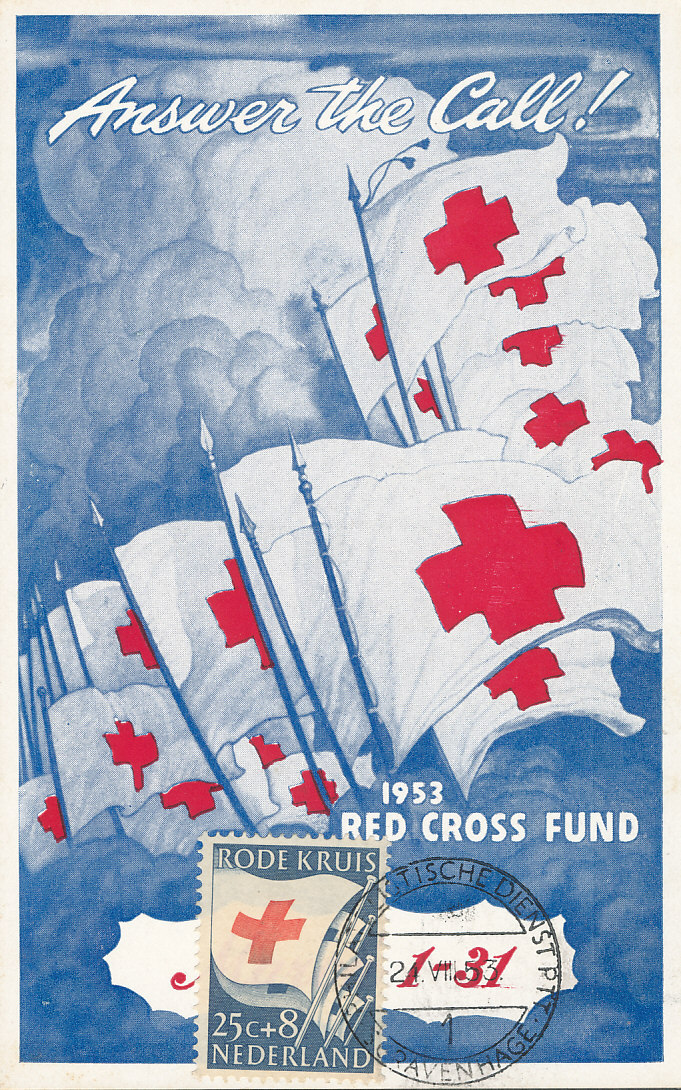 Three rare cards of this series are shown on maximum card. On the right you see the flag parade by the Red Cross. This originally American card was created by the well-known fa. Delco from New York. The two other cards show on the left the familiar shield of the Red Cross and on the right card active military personnel who assist in emergency situations. 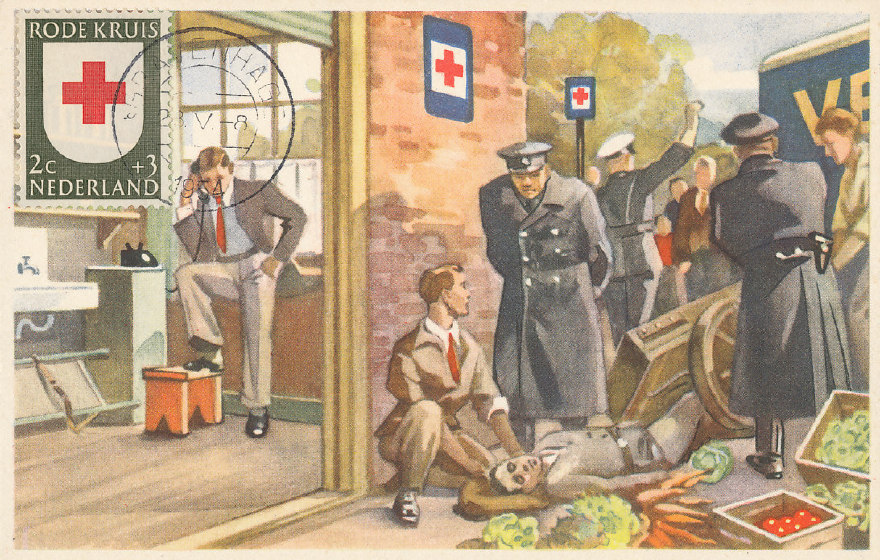 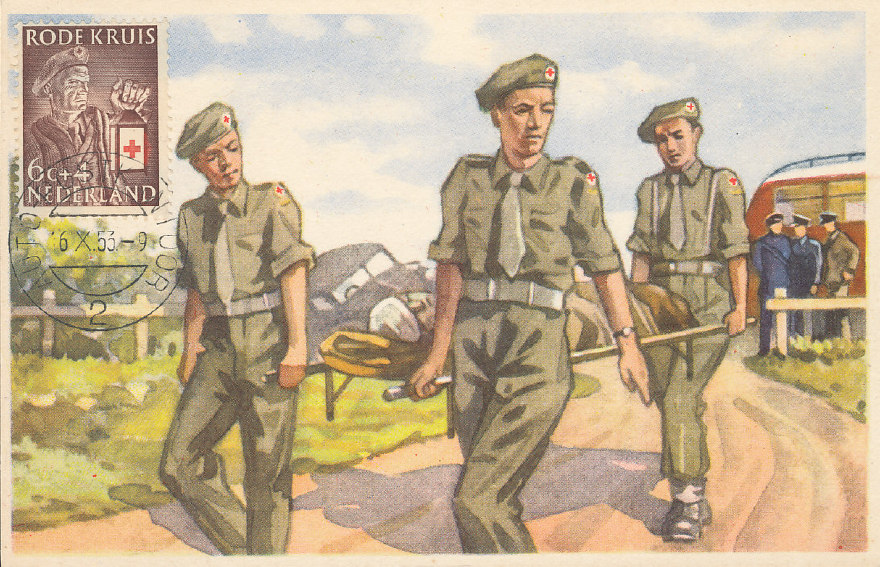 The address side indicates that these maximum cards are made by Mr. Knaapen, at that time an active Dutch maximaphilist. The Red Cross is a logo that provides protection to humanitarian and medical vehicles and buildings against military attacks according to the Geneva Conventions. It was established in 1864 during the first Geneva Convention. The founder of the Red Cross, the Swiss Henri Dunant, derived the symbol from the flag of Switzerland in which a white cross on a red background state but of which he changed the colors. This symbol is called the "Geneva Cross".

From 1957 are both next cards. The card with the pelican was made in that 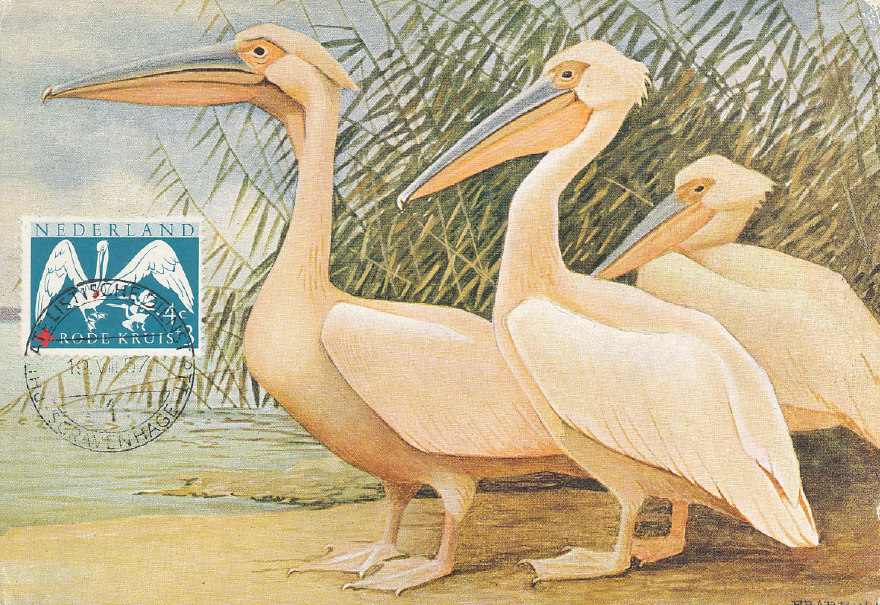 year by Mr. Fischer who has been very active in Maximaphily since the late 50s. 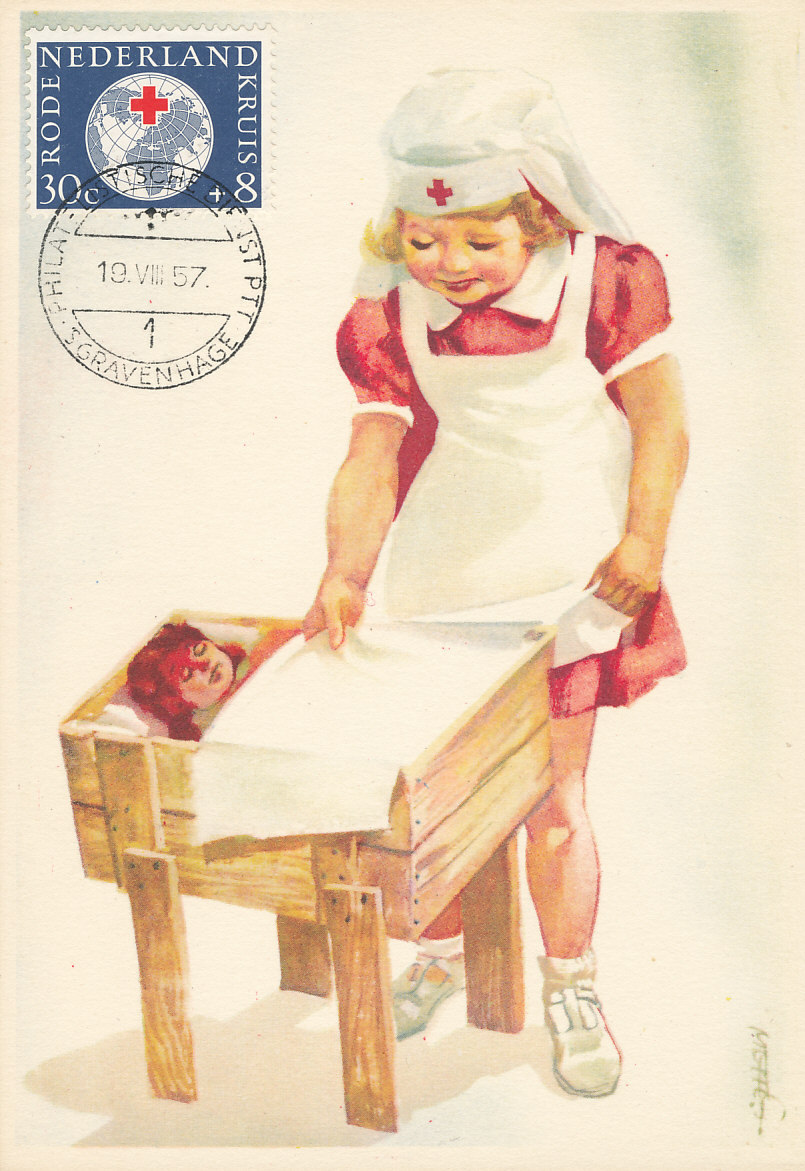 Here you see an original Red Cross card printed by the fa. Senefelder which among other things is also responsible for the realization of the so-called "Kinderbedankkaarten". On the nurses cap again the Red cross symbol can be found. The Red Cross itself issued regular series of postcards in the 50s and 60s that are perfect for creating maximum cards. 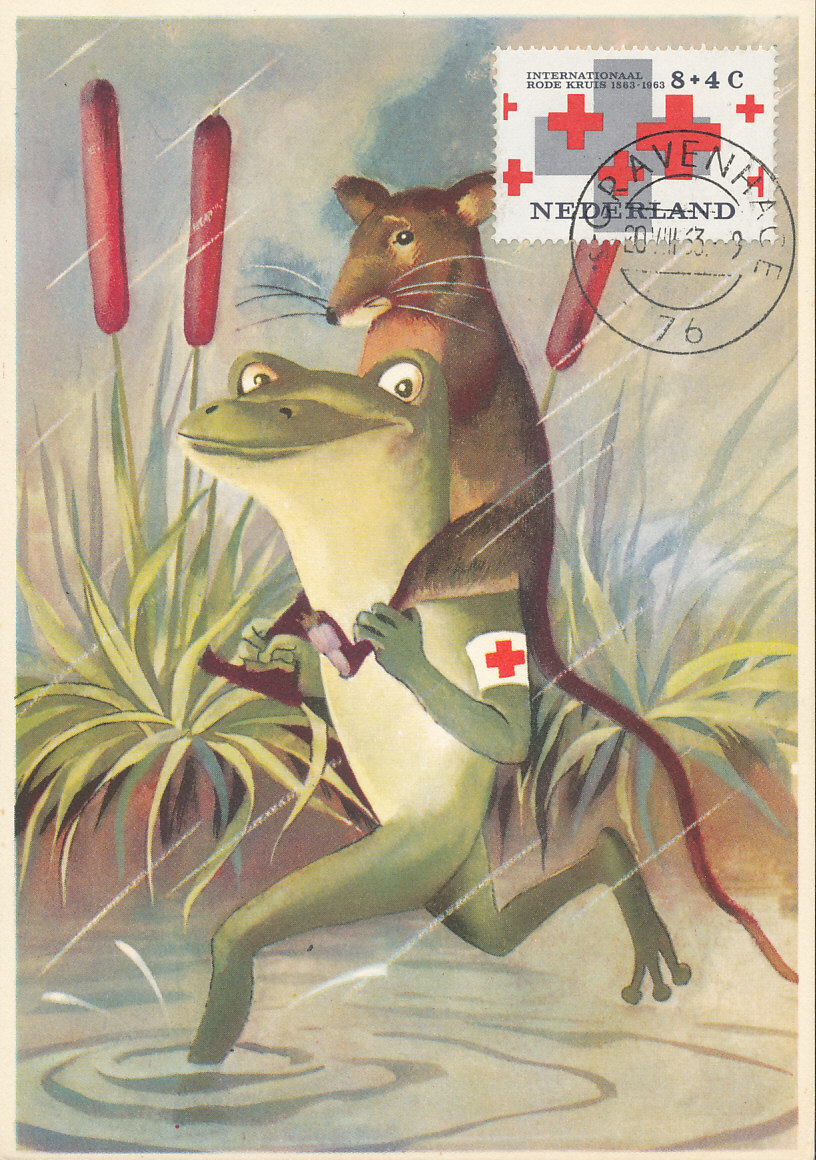 the maximum card on the right made use of such a card when again Red Cross stamps were issued. This time, the card shows in a comical way one of the main tasks of the Red Cross namely : "Helping the weak". 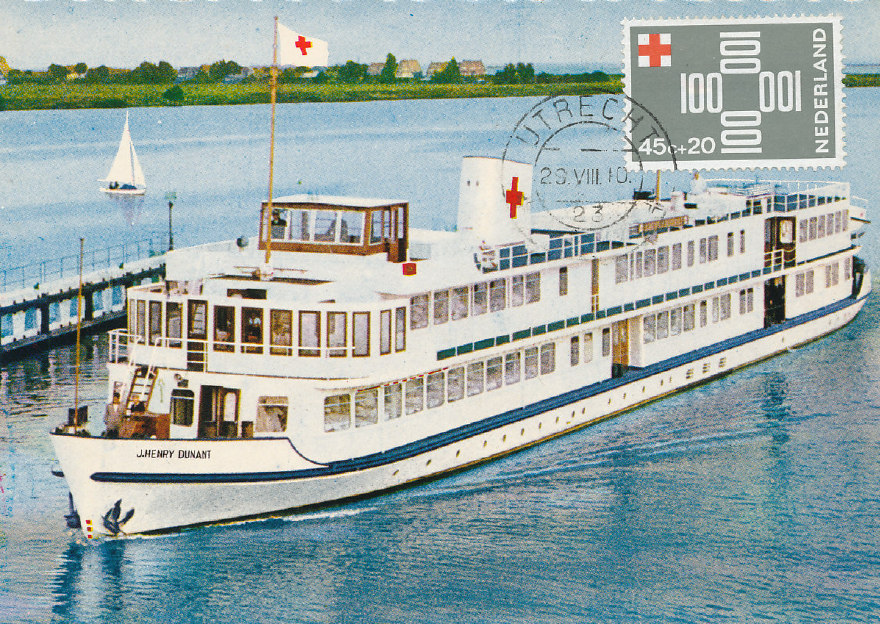 Meanwhile in 1967 a series of five stamps was issued. The designer of the stamps used symbolic representations. This typical card from the 60s shows the Henry Dunant hospital ship. The image similarity is found in the the flag and the red cross in the middle of the ship.

5 years later, the next series was issued. In 1972 appear 5 stamps showing different activities of the Red Cross. Oddly, it is very difficult to find maximum cards from this series where original cards were used. Still, I can show you one on the 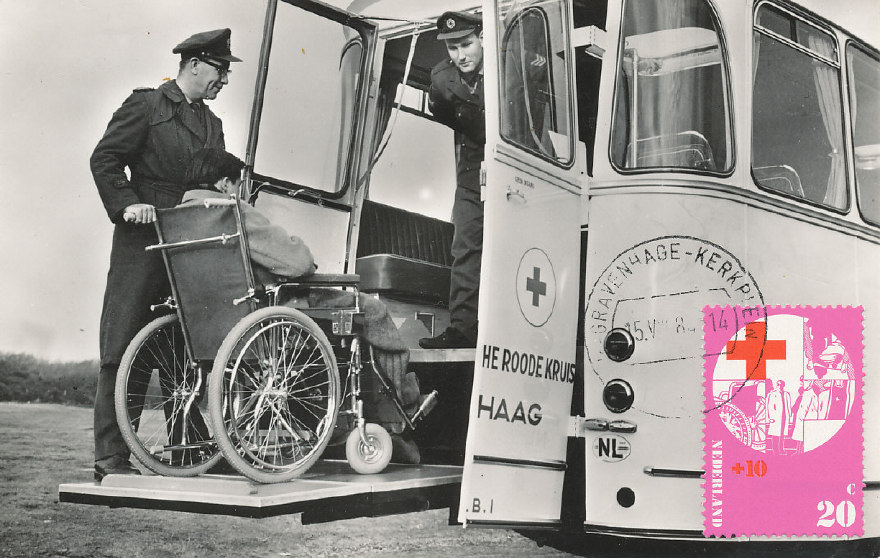 card to the right that shows a Red Cross employee who helps a wheelchair patient. 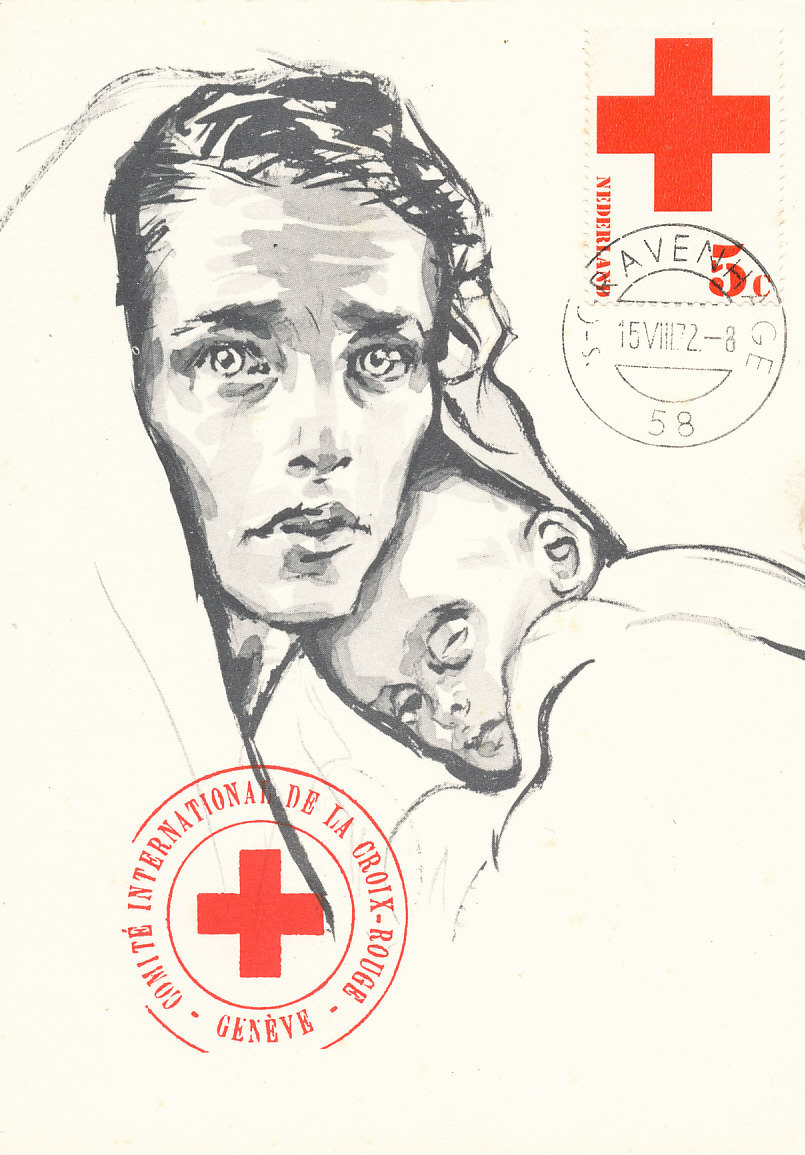 From the same series you see on the card at left a mother, perhaps in a war situation, protecting her child.

In 1972, the Red Cross itself also made a series of maximum cards created in such 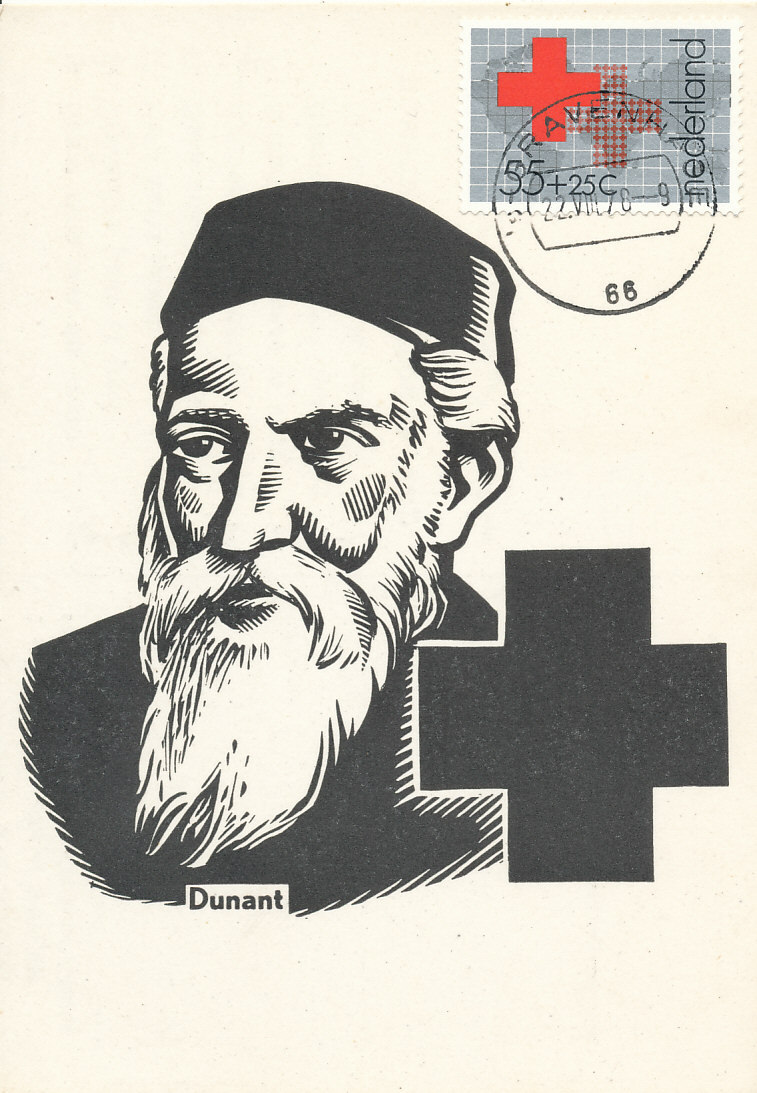 large numbers that you'll find this really offered everywhere. In 1978, appears next to a single stamp for the first time a sheet containing three identical stamps. On the card to the right the stamp is cancelled on first day of issue. This time it is a drawn portrait of an older Henry Dunant alongside the Red Cross Symbol. For this particular stamp again it is very difficult to find an original maximum card. 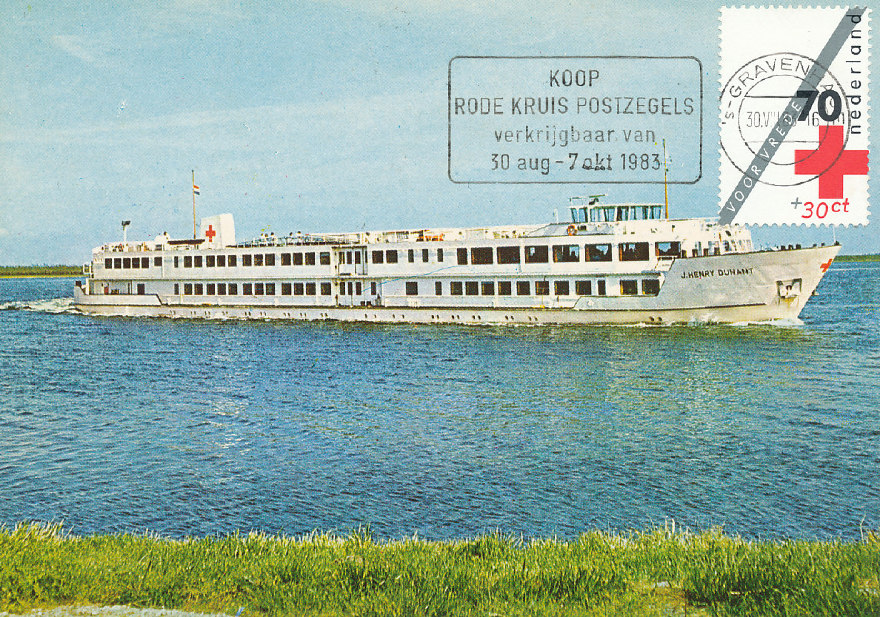 Than 1983. This time four stamps from which the creator of this maximum card has used a magnificent applicable postmark on a card with the in that time new hospital ship, the Henri Dunant.

In the Netherlands this kind of machinery cancellations are rare on maximum cards. That most cards in this article bear the postmark 's-Gravenhage has to do with the fact that the headquarters of the Red Cross are in this city also known as The Hague. 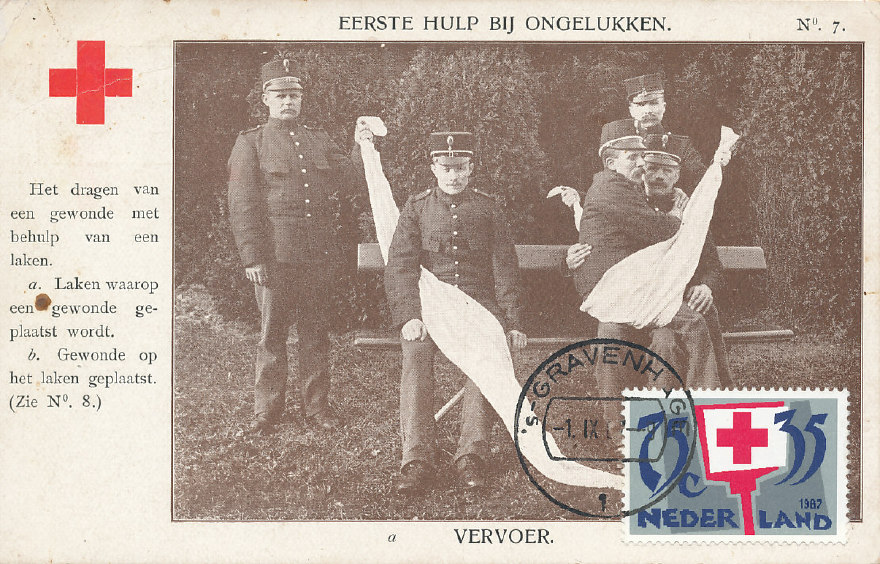 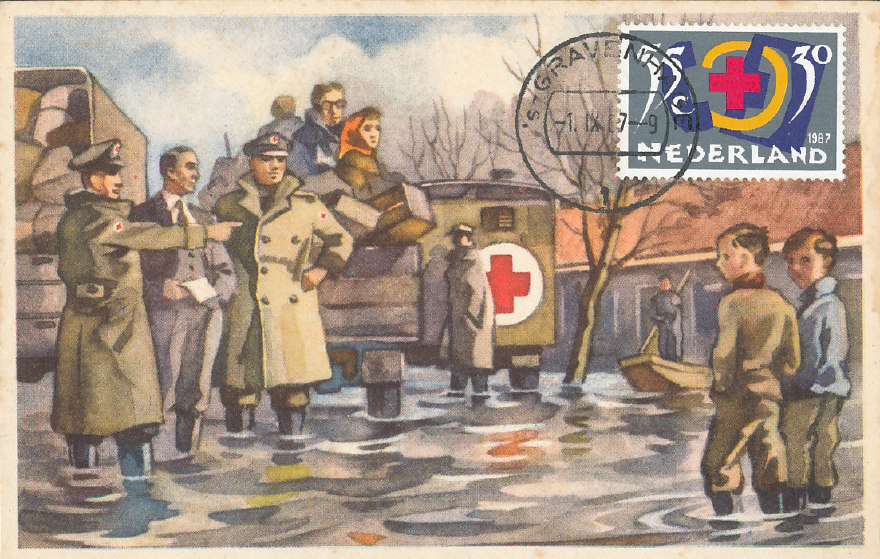 The leftmost card has a stamp from the 1987 series. The card will be from about 1910 on which explanation is given on how to transport an injured person by using a cloth. Everything as part of First Aid. A wonderful image of that time!

In a water-rich country like the Netherlands it was once common for this country to be ravaged by floods. Where help can be offered, the Red Cross is present (card on the right). Due to the construction of the Delta Works, the Netherlands are now well protected against water. 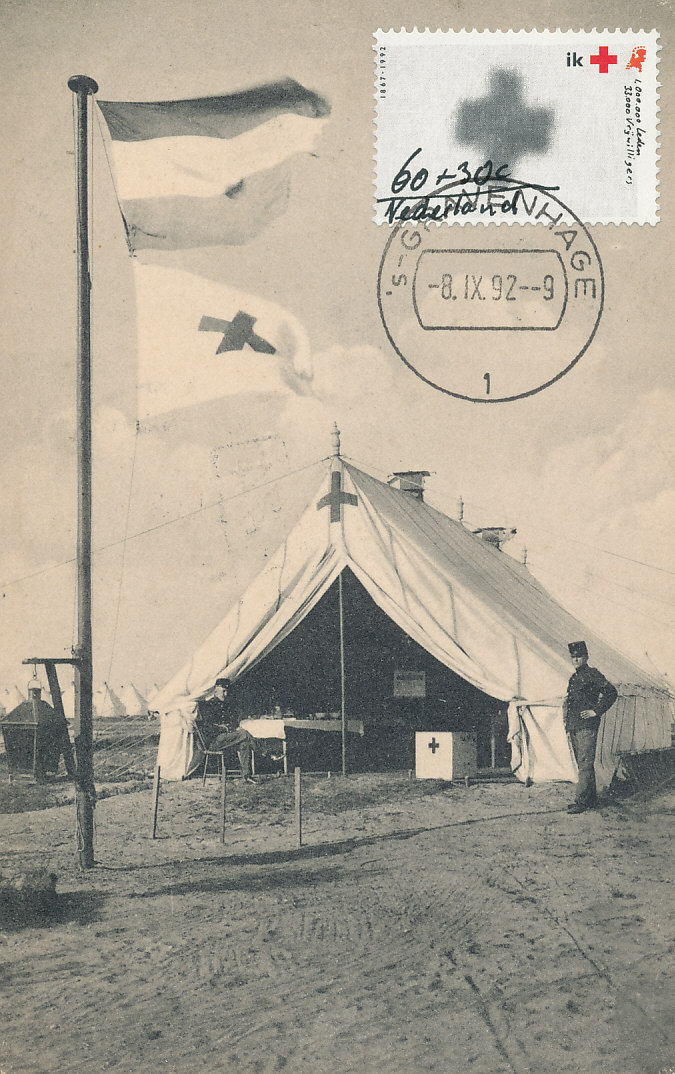 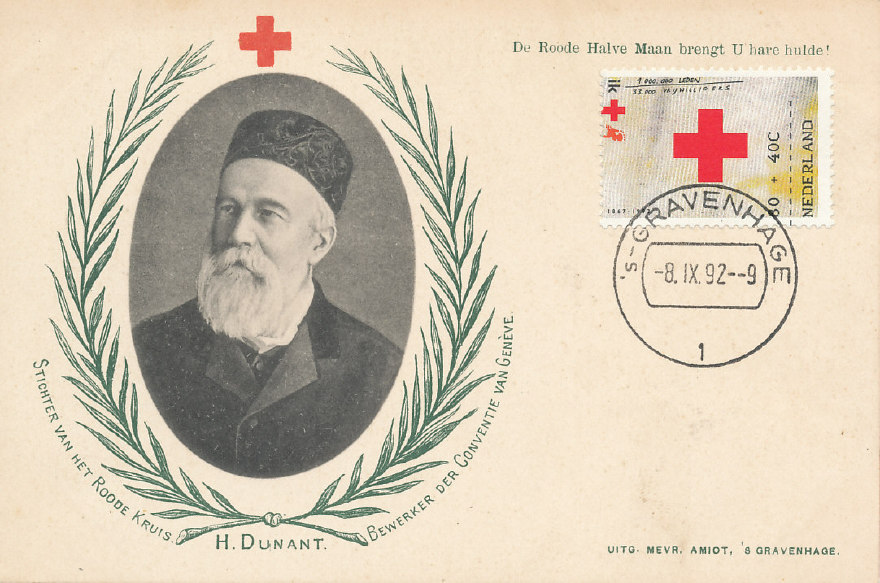 On the left, the Red Cross post with the distinctive cross on the canvas like the image on the stamp. On the right, a portrait of an older Henri Dunant, the "Founder of the Red Cross" and "Processor of the Geneva Convention", as you can read on this beautiful card from before 1907. 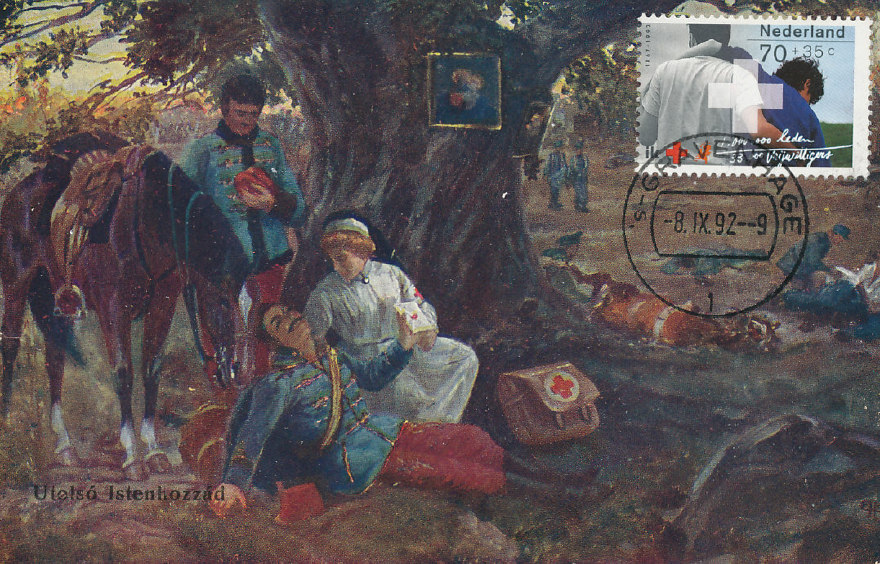 last hour as he handed her a letter, probably meant for the home front.

The modern card to the right shows two hardworking Red Cross workers on a bike on their way to, as it looks like, an emergency notification. 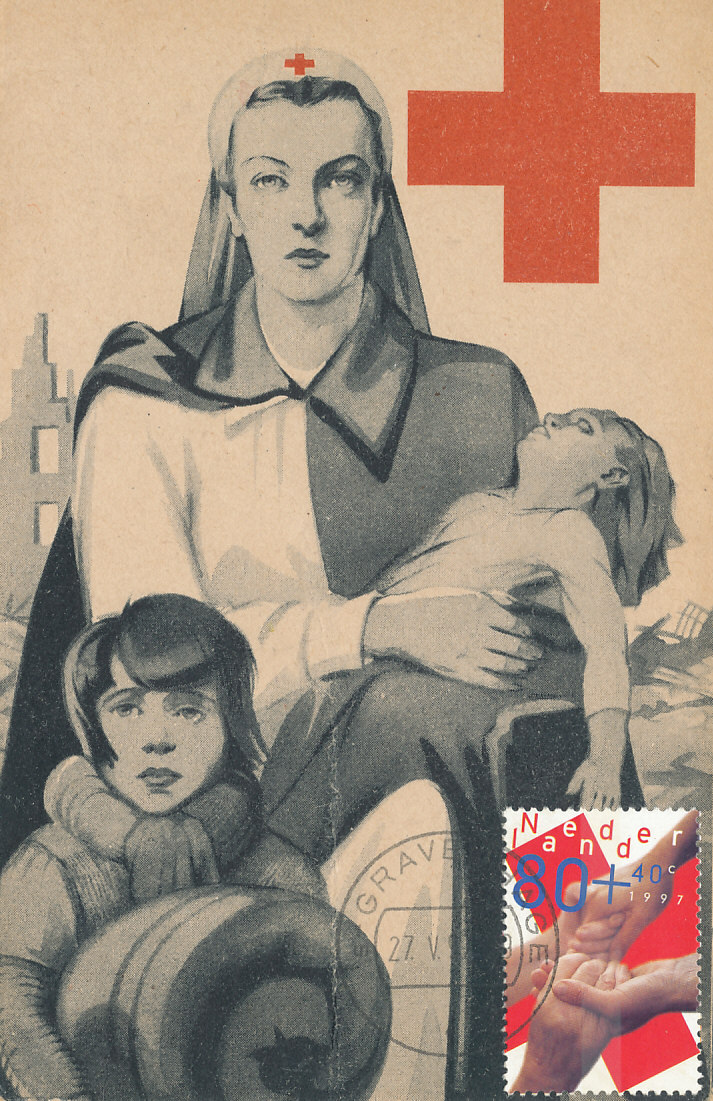 That help in war situations are eminently to Red Cross workers we see on the left picture. The stamp with the helping hands is from 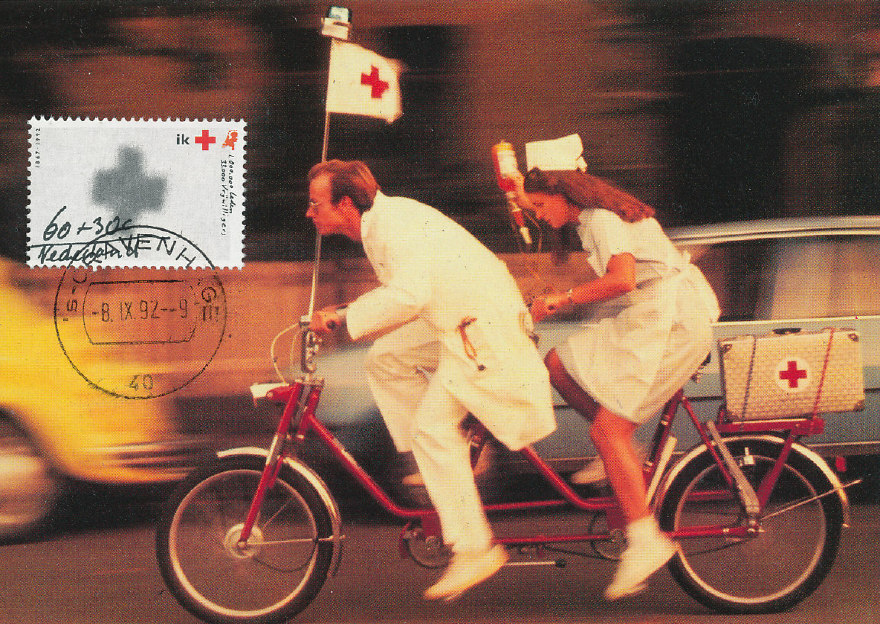 From that same year is the card underneath.
Children who play  "doctor and nurse" are an important subject when the kids are sick and a get well card is sent.

Again 5 years later in 2002, on the stamp the subject is of the National Blossom Walk in Geldermalsen, organized by the Red Cross in cooperation with ANWB and KNBLO. The card that is used shows a lady on a staircase smelling the lush of flowering 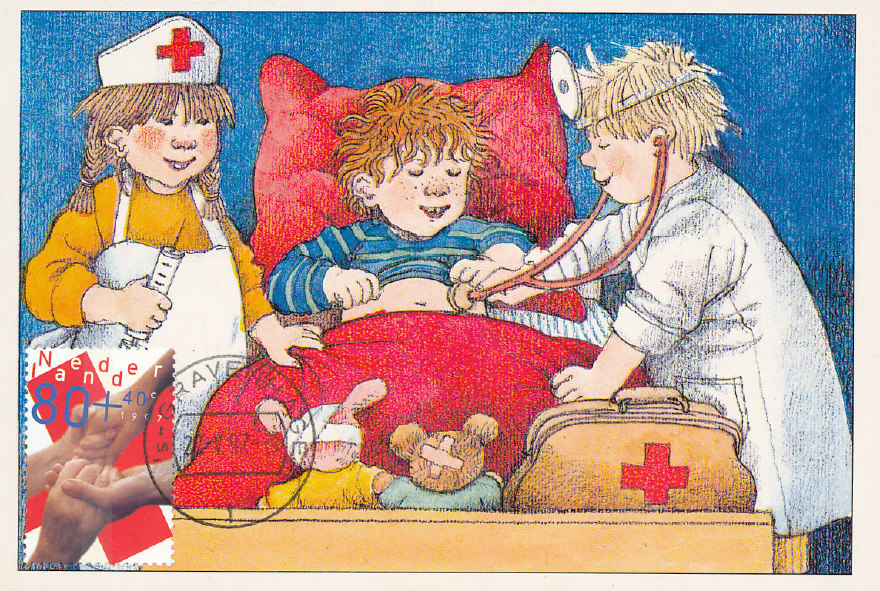 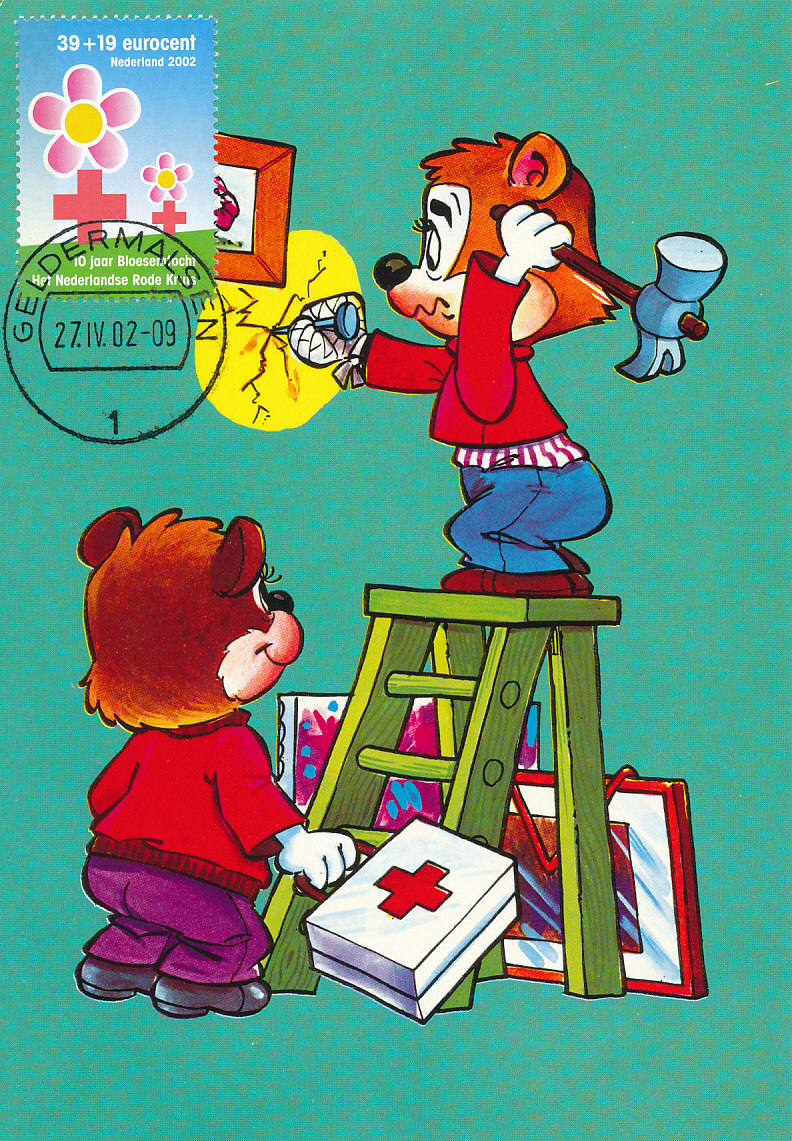 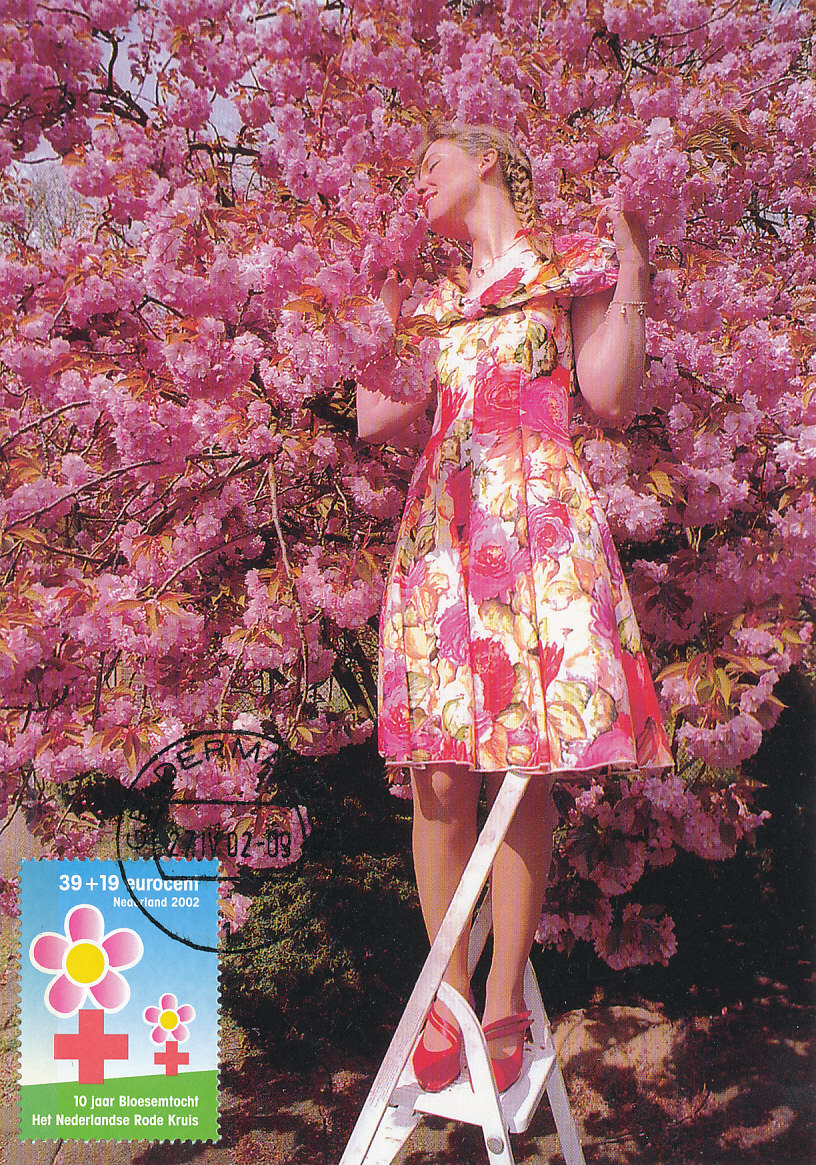 The comical card with the two bears shows the first-aid box bearing the Red Cross symbol, that is kept on hand as a precaution in case should something go wrong ......... For these two cards the postmark Geldermalsen is used. 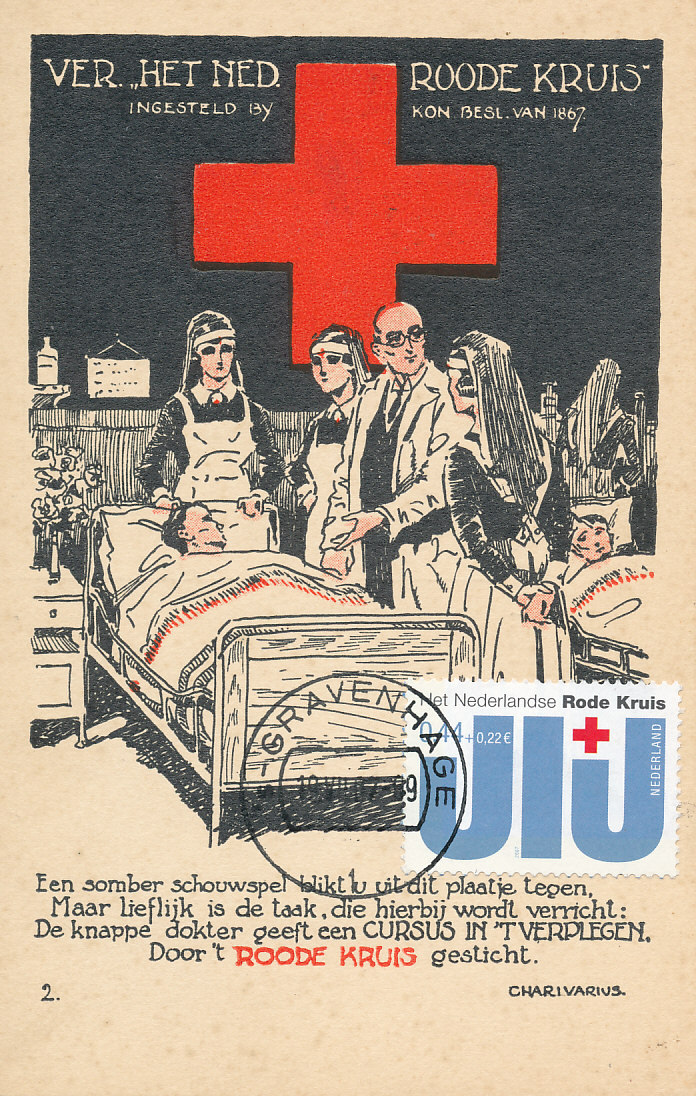 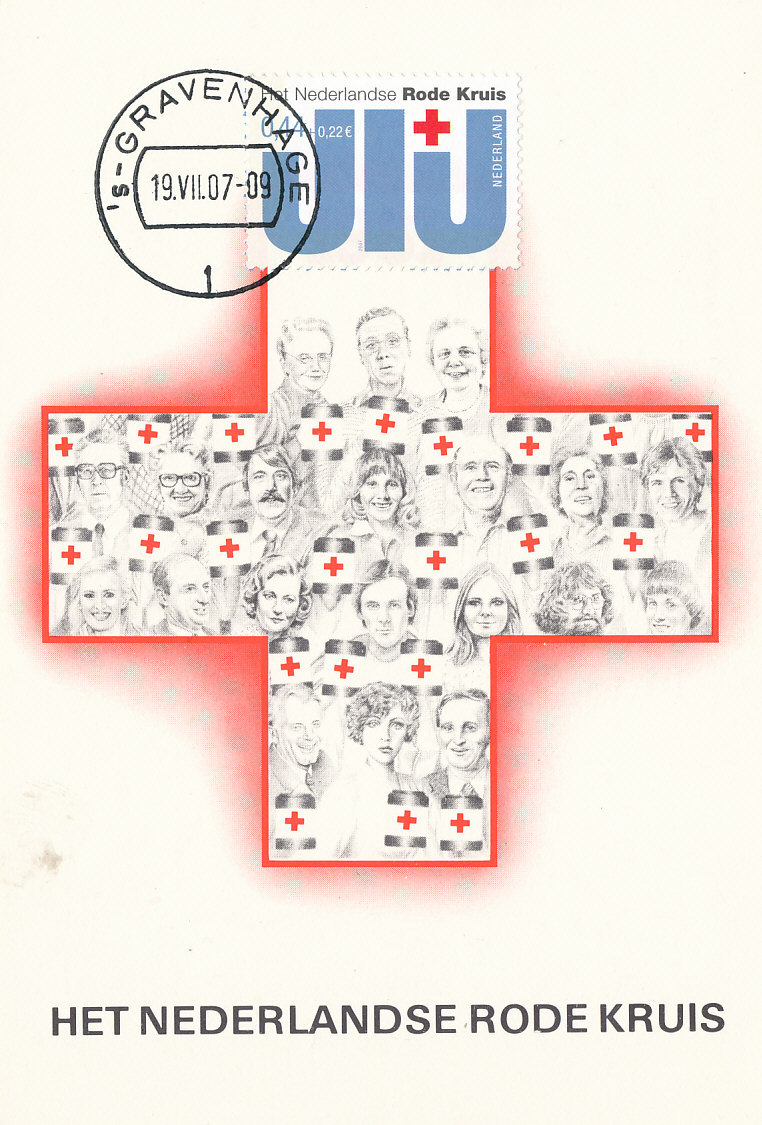 2007 again appeared a sheetlet with three identical stamps. Next to the word "Jij = You" the Red Cross is then evident. The leftmost card is issued in the years 1910-1920 by "De Vereeniging Het Nederlandsche 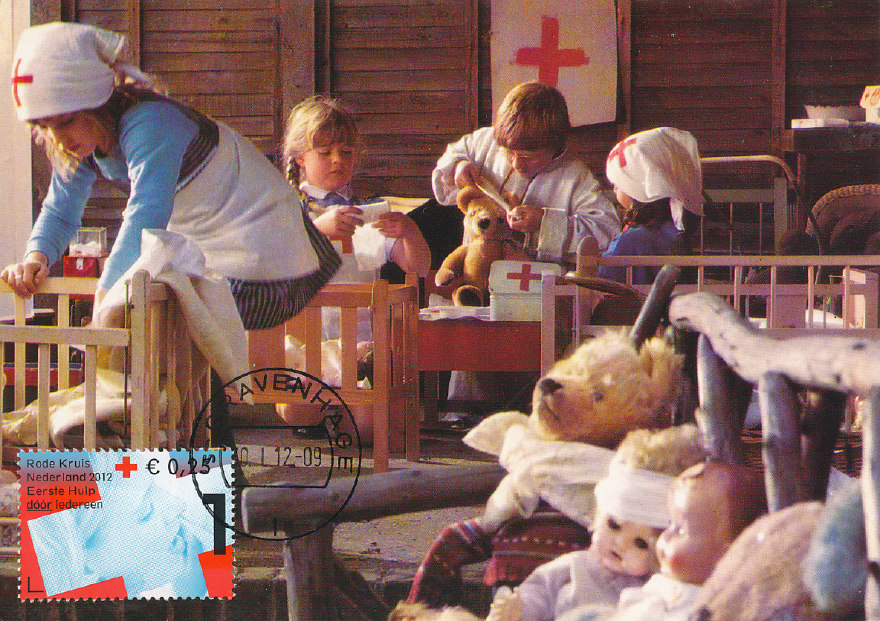 Roode Kruis". The card on the left is originally a card that was provided to the staff who had been committed during the national collection.

The most recent Red Cross stamps appeared in 2012. From a sheet of three stamps I show you these two 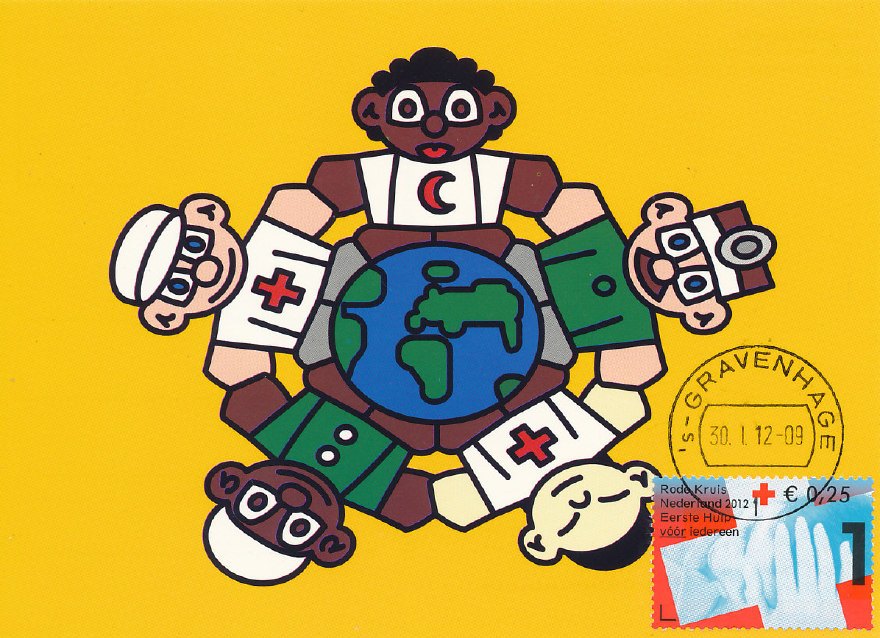 maximum cards. The card on the right shows the hospital where the nurses care for their sick and wounded bears.

The card below is an original card issued by the Red Cross, which clearly shows that it is a task for everyone, anywhere in the world to help each other. That can only lead to good results if it is done together by joining forces.

I'm at least already looking forward to the next Red Cross stamps and to give this interesting series a sequel.